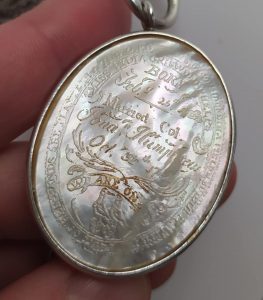 Jan Van der Veken recently posted to our Facebook group via the account of his girlfriend, Elena Kertling.  They live in Antwerp, Belgium. They shared photos and information about a pearl medallion that Elena purchased about three years ago in Antwerp that they suspected is related to the Phelps and Griswold family histories:  “About three years ago, Elena bought an old pearl medallion with a silver chain from a second hand store here in Antwerp.  Over time, a friend of hers who is knowledgeable about antiques, pointed out that the medallion had engraving on it and that it looked like an original piece, rather than something recently manufactured. She encouraged us to find out what it means.” With the help magnification, they were able to make out the following text:

Internet searching located the grave of a Lydia Griswold Phelps Humphrey, buried in Simsbury, Connecticut. She was born on February 25th 1764, married to a Colonel Jonathan Humphrey on October 31st 1781, and passed away on July 26th 1828.

They concluded from the grave information that this medallion likely belonged to Lydia.  Jan stated the following:  “Now that we have discovered the origin of the medallion, we would love to know what kind of person Lydia was, what kind of life she had, whether she has any living descendants.”  They are also curious about how the medallion could have wound up in Antwerp, Belgium. 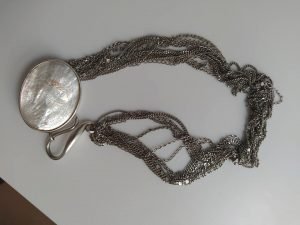 GFA Facebook Group member, Abbey Kendzior Stickney, shared a link to an archived book about Richard Brunton titled “An Early Connecticut Engraver and His Work” by Albert Bates published in 1906, which includes a description of this and two other pieces that Brunton engraved: “A most interesting series of three silver ornaments engraved for one family are those bearing the names of  Mrs. Jonathan Humphreys and her daughters, Laura and  Nancy.  The one belonging to Mrs. Humphreys, nee Miss Lydia Griswold Phelps, is the largest and most elaborately engraved of the three. Around the edge on either side is engraved a verse, the sixteenth and twenty-third, from the last chapter of Proverbs; but curiously neither of the verses is that of the birthdate of herself, her husband, or either of her three daughters… Jonathan Humphreys, whose second wife she was, was a merchant and a man of influence in Simsbury. He served in the Revolution during the early part of the war. In 1777, he was commissioned as Ensign of a company in the eighteenth regiment of militia, of which his father Jonathan was then Colonel, and he rose to be, in 1794, Lieutenant-Colonel-Commanding of the regiment… Their second daughter Laura Griswold Humphreys married Jan. 12, 1813, Richard Bacon of Simsbury. She died in that town Nov. 18, 1859. The youngest daughter, Nancy Humphreys, died unmarried in Simsbury Jan. 7, 1822.  These three ornaments are now the property of Mrs. Chauncey E. Eno of Simsbury, a grand-daughter of Laura Humphreys Bacon.”

If you have any additional information about this heirloom, please reach out to us at contact@griswoldfamily.org.