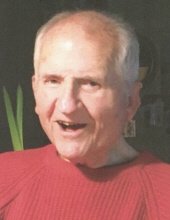 William Herbert Griswold (Griz/Grizzy), of East Windsor, CT, passed away peacefully at home after a brief illness on September 7, 2022, at the age of 94.

Griz or Grizzy, as he always wanted to be called, was born on June 6, 1928, in Hartford, Connecticut to Herbert Henry and May (Gage) Griswold. He grew up in Windsor Locks, CT. He played basketball at Windsor Locks High School and was Vice President of his graduating class (1946). Summers were spent with his family in Madison Beach, CT where Griz enjoyed performing in the Madison Beach Club Follies. He attended Hillyer College before joining the CT Air National Guard. His love of dogs and his interest in dog training started during his teen years. He eventually founded, “Bill Griswold’s Dog Training Classes”, adopting the American Kennel Club standards of dog training as his guidelines. He later attended the University of Hartford, receiving a Bachelor’s Degree in Math and later a Master’s Degree in Business Education. Griz conducted dog training classes for over 40 years. He lived in Granby, CT and taught math and then business subjects at Granby Memorial High School for over 30 years. He was also the senior class advisor at GMHS for many years. After retiring, he was known to say repeatedly that he had loved and enjoyed both teaching careers so much that he felt as if he had never had to work a day in his life. And he continued to miss those jobs right up to the end.

Always interested in traveling around the US in a camper, Griz and his wife traveled extensively around 49 of the 50 states. As he didn’t like to fly, Hawaii was the state he never visited. His dream to become a full-time RVer came true after retirement in 1988. He and Alice gave up their home for a motorhome, joined the Escapees (full-time RVer club) and started spending the summer months in Southwick, MA and the winter months in Apache Junction, AZ. Griz really loved being “on the road again” each spring and fall when they would start their cross-country trip. After retirement, he and Alice took up square dancing and card playing. He also enjoyed being a volunteer tutor for the GED program in Arizona.

Besides his love for teaching both humans and dogs, and the vagabond spirit that kept him traveling the country in a motorhome up to the age of 93, Griz was fascinated by radios. Growing up in an era without television, he had fond memories of the entire family sitting around the radio listening to Fibber, McGee and Molly. His love of radios continued into adulthood; Heather recalls that, at one time, she found 31 radios around the house, put them on a table, and took a photo of him with them. He also had a great love of musicals and many summer nights in the 1960s and 70s were spent happily by Griz and his family at the Storrowton Music Theatre in West Springfield, MA. He developed a fondness for country music and especially liked Johnny Cash. He believed in donating locally, hated wasting money, was very honest, and loved laughter. He always welcomed the chance to stand in front of a crowd and tell jokes. The sound of laughter brought him great joy.

Griz was preceded in death by his younger sister, Betsy (Griswold) McLean. He is survived by his present wife of 38 years, Alice (Westerberg) Griswold; his former wife of 30 years, Joan (Cascio) Griswold of Granby, CT; his daughter, Heather Griswold and her husband Kenji Azuma of Tokyo, Japan, stepson, Michael Cruickshanks of Southwick, MA; his grandson, Hiro Azuma and his wife, Mariko; and three great grandsons, Toshiaki, Taiu, and Towa of Tokyo, Japan. He also leaves three McLean nephews, John, Chris, and Mark, and their wives, niece Nancy McLean, and several great nieces and nephews, as well as a great great niece and a great great nephew.

Alice and Heather want to express their special thanks to Mark and Marcie McLean and stepson, Michael for the kindness and attention they showed to Griz over the years.