Greetings, I too descend from the Edward line and wanted to share a copy of this photo. The original has been donated to the Southold Historical Society in Southold, N.Y., where my ancestors once lived.

My grandmother, Katherine Alma Griswold Newcomb Briand (1888-1970) is in the back row, second from the right, wearing the wide-brimmed straw hat. She went by Kate and was the daughter of William D. Griswold (1866-1961) and Mary A. Kenney (1862-1924.) My great-grandfather was the longtime caretaker of property owned by relatives of Ralph Waldo Emerson. The photo is undated but is believed to have been taken about 1898. According to staff at the Southold Historical Society the students are more than likely at the Bayview School which is currently on the grounds of the historical society. Originally, the school was at the intersection of Jacobs Lane and Bayview, and my grandmother’s family lived nearby on South Harbor Road. Kate was the second born of William and Mary’s six children.

I’m sure others in this group descended from that family in Southold, and possibly, some of Kate’s siblings are in the photo. 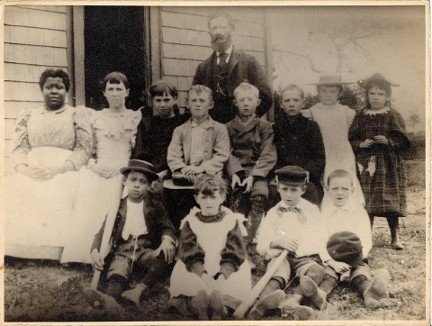