Board member, Jack Hooten, recently shared hard copies of historic Griswold Family Bulletins going back to as early as 1938 from the estate of his late uncle.  We’ll be periodically sharing interesting portions of content from these old bulletins.  We hope that you enjoy this window into the past. 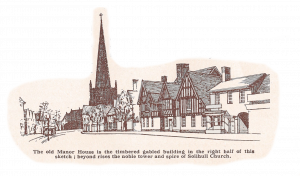 In the village of Solihull– pronounced locally “Sihool”, in the Forest of Arden, in “Shakespeare’s England”, was built in or about 1472 the Manor House as the ancestral home of the Greswold family.  It still retains in its ancient nucleus the authentic appearance of an old English village home.  In good repair, capable of being preserved without undue expense for useful future purposes, and standing in grounds covering 4,000 square yards, the Manor House is indeed a part of Old England.

The house has now been purchased by the Manor House Preservation Committee, composed of responsible local residents, who undertook to raise by voluntary donations the sum of 12,000 Pounds necessary to secure for all time, this fine old building.  Just how long the house was occupied by the Greswold family is not known, but attempts are being made to secure a record of occupancy.

One claim to fame of the Greswold family while occupying the house is that the Rev. Henry Greswold was one of those who, when Dr. Johnson sought a post as schoolmaster at Solihull, rejected the Doctor’s application on the ground of his being “uncouth” in his manners”.

Reverend Hervey DeWitt Griswold, who died on May 11, 1945, was born May 24th, 1860, at Dryden, New York.  He was the son of Benjamin and Laura (Hurd) Griswold.  Rev. Griswold will be remembered as the first Secretary-Treasurer of the Griswold Family Association.  He received his Bachelor of Arts degree from Union College in 1885, and graduated from Union Theological Seminary in New York in 1888.  He also attended Oxford University in 1889 and the University of Berlin in 1890.

In June 1860, Rev. Griswold married Miss Fannie Sheldon, also of Dryden, New York.  In 1900 he received the degree of Doctor of Philosophy from Cornell University, and the degree of Doctor of Divinity from Union College in 1910.  He was Professor of Philosophy at Foreman Christian College, Lahore, India, from 1894 to 1913, when he returned to the United States to become Chairman of the Council of Presbyterian Missions in India, as well as Director of Foreman Christian College.  He was the author of “Brahman, A Study of Indian Philosophy”, “The God Varuna in the Big Veda”, as well as many pamphlets on religious sects of modern India.

Griswolds in the News

Four boys and one girl are the winners of a $1,500 Scholarship each, at the University of Rochester, after nation-wide competition among high school students.  Lewin T. Griswold of Hamburg, NY, was one of the successful contestants.

Margaret Axson, the youngest sister of Ellen Wilson, first wife of President Woodrow Wilson, has written a most engaging book entitled “My Aunt Louisa and Woodrow Wilson”.  In one of the chapters she describes Miss Florence Griswold’s home in Old Lyme and how Mrs. Wilson loved to paint there.  Also that the Wilsons often were guests of Miss Florence.

John Robert Griswold, Mo. M. M. 2-c, son of Mr. and Mrs. Robert Griswold has been serving with a submarine division in the Pacific area for the past two years.